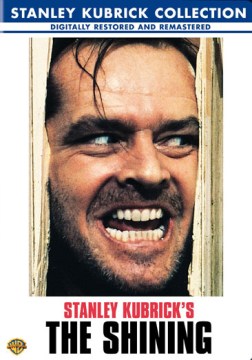 I have always liked scary stories.  Television shows such as The Twilight Zone and The Outer Limits would captivate me and cause my heart to race – and make my siblings flee the room in terror!  Late night showings of classic horror films like The Creature from the Black Lagoon and Frankenstein were certain to leave me happily sleep deprived. I once walked home alone after a midnight… (more)

I have always liked scary stories.  Television shows such as The Twilight Zone and The Outer Limits would captivate me and cause my heart to race – and make my siblings flee the room in terror!  Late night showings of classic horror films like The Creature from the Black Lagoon and Frankenstein were certain to leave me happily sleep deprived. I once walked home alone after a midnight screeni… (more)

This really isn't my thing.... It's not because it didn't follow the rather stupid-sounding novel but rather what everyone gushes on this thing; from psuedointellectual rob ager to the other nut cases in Room 237. You hear everyone talking about hidden subtext and all these theories from being a metaphors for genocide to all being in their heads but then you read the director's blurb that Jack was simply reincarnated and that the one scene in the freezer was to prove the ghosts, it just feels rather lacking. And on top of that, the actual movie itself without such "discussion" and "debate" is just....empty; the rather cartoonish acting (Jack tourrance will never be as terrifying as Anton Chigurh or Michael rooker's Henry) the inconsistent sets (Kubrick gets praised for it while any other director would get shot for it) and the incredibly shallow story that only picks up in the last minute as well as the only remotely scary moments being brief and completly dropped. All in all the emperor has no clothes and if you want an ACTUALLY intelligent horror movie that is infinitely more creative, personal, and with an actual point to make and could use more respect, check out JACOB'S LADDER.

the ultimate high budget cult horror movie classic- the Shining- in many respects - consists of a series of ever more menacing vignettes. Certain scenes are of particular fascination.
The drive up to the overlook, the interview, the bar scene with Lloyd and later Grady in the very strange orange bathroom- and finally - the super nightmare sequence of the young turning to old corpse in Room 237.
The movie has been examined to the point of exhaustion and thats what makes it great- to some it is just a scary creepy movie- to others it is a biting analysis of white supremacy and the patriarchy gone berserk- ( Grady may symbolize the ultimate " white" persona) to others it is about Writers block and being taken possession by dark forces.

It is the one of the only scary movies where the most frightening scenes are shot in bright light. This movie is a psychoactive as well as hypnotic masterpiece.

What a marriage between the amazing talents of Jack Nicholson, Shelly Duvall and Stanley Kubrick! It's a liberal adaptation of Stephen King's novel by the same name. With wonderfully memorable performances by Scatman Crothers and child actor Danny Lloyd, the terrifying story comes to life on the screen. Nicholson plays a tortured writer who brings his family to the remote Overlook resort for the off-season to work on his latest book and slowly descends into madness. Great performances by all. A must see for anyone wanting to see a thriller that will have you on the edge of your seat to the very end! Brilliant!

Originally released as a motion picture in 1980 based on the 1977 novel by Stephen King, this American psychological drama depicts an eerie story at a hotel in the Colorado Rockies.
Master of visual images, director Kubrick displays his brilliance in many of the scenes.
However, much of the suspense ends in anti-climax, and Jack Nicholson and Shelley Duvall seem over-extended in trying to maintain the terror.
Shock effect and graphic imagery don't compensate for the sense of pointlessness and even distaste that is left at the end of the movie.
The film appears way too long and a little too slow in pace.

More interesting as a cinematic exercise than as an adaptation of Stephen King's book, The Shining shows Kubrick adding the visual-design influence of Godard--pure-hued colors, big blank walls, industrial-modern interiors (the Overlook Hotel must have been remodeled in the '50s)--to his long tracking shots and still-life-like room interiors a la 2001. This makes for magnetic watchability, though as a kind of museum patron, gazing more than seeing. The very high lighting dispels noirish romanticism, and so do the very showy performances of Jack NIcholson as Jack Torrance and Shelley Duval as his wife, Wendy; compared to them, little Danny Lloyd as their son, Danny, seems the more professional, or at least conventional, thespian. The film as adapted by director Kubrick dispenses with Stephen King's notion that the hotel is possessed, not just haunted and greatly downplays the phenomenon of "shining" with which the cook, Halloran (Scatman Crothers)--the novel's hero--and Danny are gifted. These de-emphases transform the plot mechanism into Jack's mental breakdown, rather turning the spooky stuff--the murdered little girls, the women in the fatal apartment, the cataracts of blood--into fanciful window dressing. Add extremely slow dialogue delivery and a high-art classical melange soundtrack to the mix, and you have a horror movie trying way too hard not too be "vulgar" amidst its own torrent of vulgarities. --Ray Olson

My all time favorite horror movie is The Shining, set in the fictitious Colorado town of Sidewinder, at a hotel that shares many similarities with Colorado's own Stanley hotel. This is a classic Kubrick film featuring outstanding cinematography, a great creepy score and timeless cast. Watch the original before Doctor Sleep hits theaters in November!

One of the most outstanding thrillers that I have ever seen. It has great actors and exploding, dramatic scenes!

This show is pretty good! It has a slow start but at the end it is suspenseful and a bit creepy! However I thought the “Here’s Jonny” part was weird because no one is named Jonny in the show..................

Better than the book, better than the mini-series, better than anything else that ever will be made from this source material. Kubrick elevates King's serviceable horror tale into a sublimely atmospheric meditation on human nature, destiny, and the supernatural.

Jack Torrance: [typed] All work and no play makes Jack a dull boy.

"Some places are like people: some shine and some don't."

Delbert Grady: "Your son... has a very great talent. I don't think you are aware how great it is. That he is attempting to use that very talent against your will." Jack Torrance: "He is a very willful boy." Delbert Grady: "Indeed he is, Mr. Torrance. A very willful boy. A rather naughty boy, if I may be so bold, sir." Jack Torrance: "It's his mother. She, uh, interferes." Delbert Grady: "Perhaps they need a good talking to, if you don't mind my saying so. Perhaps a bit more. My girls, sir, they didn't care for the Overlook at first. One of them actually stole a pack of matches, and tried to burn it down. But I... "corrected" them sir. And when my wife tried to prevent me from doing my duty, I... "corrected" her."

Delbert Grady (about Wendy): "I fear you will have to deal with this matter in the harshest possible way, Mr. Torrance... I fear... that is the only thing to do..." Jack Torrance (locked in the food pantry): "There's nothing I look forward to with greater pleasure, Mr. Grady." Delbert Grady: "You give your word on that, do you Mr. Torrance?" Jack Torrance: "I give you my word." (food pantry door unlocks)

Jack Torrance (Smashing the door to bits with an axe): "Wendy... I'm home!"

FriendsDragonsCats44 thinks this title is suitable for 13 years and over

007Gatsby thinks this title is suitable for 12 years and over

ArronEggett thinks this title is suitable for All Ages

LUNTUNE13 thinks this title is suitable for 13 years and over

jgrnlees thinks this title is suitable for 17 years and over

zorg thinks this title is suitable for 14 years and over

jabey thinks this title is suitable for 14 years and over

Coarse Language: Some racial slurs and a few obscenities.

Frightening or Intense Scenes: Intense surrealism permeates this film. That is where most of the horror comes from this film.

Sexual Content: No sex takes place in this movie. However, there is a full frontal view of a naked woman stepping out of the bath.

Violence: Several shots are shown of characters having been murdered with an ax. Also, the grotesquely deformed body of a naked dead woman is shown. There are also shots of huge quantities of blood flooding the hotel.

Coarse Language: As the film wore on, there was more and more swearing as Jack sank deeper and deeper into the murderous crazy man he turned into.

"A masterwork from a master filmmaker, The Shining is widely (and rightly) held as one of the greatest horror movies ever made. Much more than just a ‘horror movie’, celebrated auteur Stanley Kubrick warped Stephen King’s novel into something which oozes ambiguity (the hotel was haunted in the book, here it’s less clear) – which is why it remains so fascinating to this day. Still the subject of obsessive scrutiny (see recent documentary Room 237), many aspects of the film are open to interpretation. Not least that impossibly chilling final shot. While impatient newcomers will likely find the measured pacing a tad drawn-out (and there is an argument to be made here), The Shining is a deeply intoxicating experience. Right from the eerie opening where we wind along a mountain road via helicopter point-of-view, there’s a mounting sense of elusive unease. Arriving at the Overlook hotel, a feeling of deep-rooted evil runs through every frame in mesmerising fashion. Hell, even the dizzyingly-patterned carpets are somewhat hypnotic. Of course, general audiences are familiar with the more iconic scenes (“Heeere’s Johnny!”; the spooky twins; Red Rum), and it speaks volumes that they remain affecting despite years of parody. Jack Nicholson, Shelley Duvall and child actor Danny Lloyd are all excellent (as well as Scatman Crothers in a handful of key scenes), but the film is ultimately Kubrick’s. Feeding Nicholson cheese sandwiches (which Jack hated) to create a sense of repulsion and apparently forcing Duvall to do 127 takes of a single scene, the master craftsman’s obsessive approach and technical mastery results in some spellbinding filmmaking (see those long tracking shots), and an unforgettable experience." --Stephen Carty, Flix Capacitor