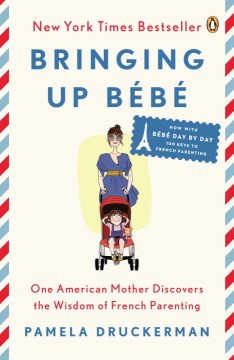 One American Mother Discovers the Wisdom of French Parenting

"The secret behind France's astonishingly well-behaved children. When American journalist Pamela Druckerman has a baby in Paris, she doesn't aspire to become a "French parent." French parenting isn't a known thing, like French fashion or French cheese. Even French parents themselves insist they aren't doing anything special. Yet, the French children Druckerman knows sleep through the night at two or three months old while those of her American friends take a year or more. French kids eat well-rounded meals that are more likely to include braised leeks than chicken nuggets. And while her American friends spend their visits resolving spats between their kids, her French friends sip coffee while the kids play. Motherhood itself is a whole different experience in France. There's no role model, as there is in America, for the harried new mom with no life of her own. French mothers assume that even good parents aren't at the constant service of their children and that there's no need to feel guilty about this. They have an easy, calm authority with their kids that Druckerman can only envy. Of course, French parenting wouldn't be worth talking about if it produced robotic, joyless children. In fact, French kids are just as boisterous, curious, and creative as Americans. They're just far better behaved and more in command of themselves. While some American toddlers are getting Mandarin tutors and preliteracy training, French kids are-by design-toddling around and discovering the world at their own pace. With a notebook stashed in her diaper bag, Druckerman-a former reporter for the Wall Street Journal sets out to learn the secrets to raising a society of good little sleepers, gourmet eaters, and reasonably relaxed parents. She discovers that French parents are extremely strict about some things and strikingly permissive about others. And she realizes that to be a different kind of parent, you don't just need a different parenting philosophy. You need a very different view of what a child actually is. While finding her own firm "non", Druckerman discovers that children-including her own-are capable of feats she'd never imagined."--Provided by publisher.
Publisher: New York : Penguin Press, 2012
ISBN: 9780143122968
9781594203336

List - Memoirs you won't be able to put down!

In this memoir about parenting in France, Pamela Druckerman writes about the difference between how babies are raised in France, and those in the United States. Druckerman moves to France to find out French parents' secrets to well behaved toddlers.

“Do not make your kids to be your project!”

I am not a Mom, but I am an aunt and I am from another country. I adored this book. I have often watched parents with their children, and I have found myself wondering about the different ways that children are raised. Humorous with patronization, and with an Expat's eye for detail, this is a book that's great for the ones with children and the ones that are childfree. Also, it makes a great baby shower present!

I feel like this book gave me a little snap shot of what motherhood might look like. There is also a lot of good advice about diet and sleep training. I recommend this book to all my pregnant friends. Fun to listen to as an audio book too!

Some very insightful points that I will definitely bring into my future parenting style. Unfortunately, I found the author's voice a little alienating and I had a hard time finding her likable. If this book had fewer personal anecdotes, I would have enjoyed it a lot more. Still worth a read!

With my experience of living in France for almost 3 years, this book reveals the true and interesting aspects of French parenting, which is a mind-refresher for parents in North America. Every parent has their own parenting style, but this book gives you a good reference. I find it interesting and useful in setting up my parenting style.

I found this book really insightful... and then the last 75 pages or so petered off. It's a great reflection on cultural norms, and a reality check on what North America does to invigorate development in their children, that's not necessarily helpful or scientifically supportable.

We found this to be an educational look into an American mother's experience living in France and how parenting differs between the two countries. We have lived in Germany for several years, so I can say some of her reflections on French parenting extends somewhat to other western Europe countries. Children and parents in Europe we have found are overall calmer and everyone seems much more mature, so we really appreciated this insight (we haven't had children ourselves, but we both mostly agreed with the European methods and found a lot of the nuances of American parenting, which we've seen examples of both, to be a bit ridiculous). It makes me curious to read about other country's child rearing, especially since I've been interested in education reform.

I tried to read What to Expect When You're Expecting, but it freaked me out with all the possibilities of what could go wrong. I read this after baby was already here but I liked how the writer mom addressed different aspects of raising children. This is nonfiction that reads more as a travel memoir and not at all like a baby manual. If you're a new mom and want some advice and different perspectives on how to do things, but without it being shoved down your throat this book is for you.

Our daughter is now nearly nine, so this book came out way too late to be of any help when she was a bébé, but - DON'T READ ANY OTHER PARENTING BOOKS, ONLY READ THIS ONE, YOU WILL NEVER REGRET IT! As with any self-help-type book, take what resonates with you and leave the rest - but you may be surprised at how much relief you feel as you go through it and realize, no, life doesn't have to be this crazy child-focused hamster wheel, as it so often is in North America. I definitely think the French get some stuff wrong - breastfeeding is great for babies and mothers and they're entirely too "pooh-pooh" about it in France if you ask me - but what an eye-opener it was on things like betises (little naughtinesses) and how the French eat (our daughter has always been good at trying a variety of foods, but I love the French approach to mealtimes and so does my family). I bought this book. Fantastic. Definitely something new parents should read and take to heart. Much more restful and encouraging than anything else I've ever read about parenting (though I would also highly recommend Back Talk - now I have to go and see if hpl even has it...).

Ah, if only I'd read this last summer or fall, sometime before my five-month-old was born, because I'm quite drawn to many of the ideas. Some I'd already claimed as my own* before encountering the book, some were vague notions that have now been articulated and solidified for me, and some still feel rather surprising and foreign. I'm not one to unquestioningly adopt any model--parenting, leadership, eating, or what you will--without tweaking it and making it my own, but I believe considering and practicing these ideas will make me a more effective parent.
-----
"Model" seems the best word I can think of to describe what Druckerman is presenting; it's an examination of parenting, but not presented as a formula or handbook as many others are--part memoir, part sociological comparison, part research, it's her investigation into the cultural framework from which French parents operate, as understood through her American lens. Druckerman found herself an accidental, reluctant expatriate by way of marriage (to an Englishman) in Paris in her mid-thirties, feeling like her three young children were wildly out of control, loud, and difficult compared to their peers. Her experience as a parent seemed drastically different--and much less successful--than the French parents she saw all around her. So she decided to make a study of them to see what practices she could imitate, and in doing so she learned she first had to come to understand an entirely different mindset for thinking about parents and children.
-----
At the heart of that framework is the idea that children are fully aware, rational, capable humans from birth as deserving of respect and equal treatment as any adult, and that the role of parents is to help them grow into their autonomy through polite teaching within a frame of firm limits. Children are taught to manage themselves, respect the needs of parents, and integrate into adult society as quickly and seamlessly as possible. That sounds simple enough when summarized, but of course there is much more to it--and its differences from the predominant American approaches--than might be expected. Druckerman's explorations are revelatory, and her writing is engaging and entertaining. I expect anyone who works with or spends time around children--parent or not--would enjoy reading this simply for its insights, and many would find it more than a little helpful.

kmarushy thinks this title is suitable for 20 years and over

Last year’s go-to parenting book was Battle Hymn of the Tiger Mother, about parenting the Chinese way; this year we travel to France to see how les chic mamans do it. While living in Paris author Pamela Druckerman, former reporter for the Wall Street Journal, never paid much attention to how French children behaved, until she had one of her own. She quickly became aware that while eating out was an exercise in outracing tantrums for she and her husband, other toddlers at French restaurants were calm. Serene even. And eating whatever was placed in front of them, not screaming for McNuggets des poulet. She investigates further. She encounters a mother embarrassed that her infant was not yet sleeping through the night – at four months old – because the majority of French infants do so by two months. Some of the techniques Drukerman describes may sound harsh or neglectful – pausing five or ten minutes before attending a crying baby, for instance – but she becomes convinced that it is not about selfishly willing your baby to go back to sleep so you can get more shut eye, it is (and this is simplifying her message) about observing children simply being children and letting them work certain things out on their own. This gives French parents time for themselves too, without becoming maman-taxis, human taxis for their over-activitied children. In fact, since the government subsidises daycare, French parents often hire babysitters to do the activity-taxiing, while they take time for themselves. It sounds very civilized but the key phrase, in case you missed it, was “government subsidizes daycare”. North American parents do not often have that particular luxury, but Druckerman argues that they do have the luxury of limiting the number of activities their children do, so both parents and kids are not run ragged by the end of a day or week. As for the guilt that wracks every imperfect parent, the French cope with that simply by acknowledging that the “perfect” parent does not exist. And lest this sound like Druckerman is, in fact, the thing that does not exist, she relates in some detail how hard it became to be a chic maman Francaise when her twin sons were born. As it turns out like most things in life, it is all about moderation and finding a balance that works pour vous.