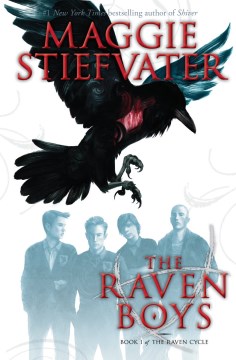 Though she is from a family of clairvoyants, Blue Sargent's only gift seems to be that she makes other people's talents stronger, and when she meets Gansey, one of the Raven Boys from the expensive Aglionby Academy, she discovers that he has talents of his own--and that together their talents are a dangerous mix.
Publisher: New York : Scholastic Press, 2012
Edition: 1st ed
ISBN: 9780545424936
0545424933
9780545424929

Four Boys and a Psychic’s Daughter

The Raven Cycle series is written by Maggie Stiefvater, and currently has three books in the series, including The Raven Boys. These books are set in Henrietta, Virginia and they tell the story of five mismatched friends: Gansey the leader, Adam the hardworking, Ronan the fierce, Noah the quiet, and Blue the psychic's daughter. After they come together under peculiar circumstances, they go… (more)

Blue Sargent has been the odd one out in her family her whole life. In a family of psychics, her only ability appears to be a speaker of sorts: her presence just strengthens the connection between the psychic and the spirit. Her whole life she has been told never to fall in love because if she kisses her true love, he will die. Until one fateful evening when she finds out her true love will… (more)

I'm not usually in the supernatural type of story but this book about lay-lines, old Nordic kings, and psychics is one of the best.

First is the series, the book introduces us to Blue Sargent, a psychic-amplifier in a house of psychics, as well as the four young men who are about to throw her life into a heroic, terrifying adventure that might just end up changing the world. Well-developed characters, action-driven plot. Exce... Read More »

Ghosts, psychics, obsession, and other paranormal stuff so weird and creepy it gave me goosebumps. This story has layers, a dreamy ebb and flow, and each character feels real.

Wow. Another fantastic read from Maggie Stiefvater. I've been a fan since Shiver and thought the Scorpio Races was absolutely AMAZING and holy man, The Raven Boys does NOT disappoint either. Completely different from any of her other work, this book is taut, exciting, engrossing, addicting...the adjectives could go on forever. LOVED IT.

If you like books with interesting magic systems, friends that are more like family, and adventure stories that make you feel like you’re part of the journey, this book and series is for you.

I love this book. It's creepy and beautiful at the same time, in the sort of way that makes it so I can't write a reasonable review, because it's so good that all I want to do is rant about it. The characters are amazing, the descriptions are amazing, and I cannot recommend it highly enough.

I adore these characters. Glad there's more cause I just can't get enough!

Blue Sargent is prophesied to kill her first love when she kisses him. She meets a group of raven boys from the rich private school; Gansey, the privileged leader searching for a greater purpose, Adam, the scholarship kid who wishes he was born into a better life, Ronan, the rebel who says whats on his mind, and Noah, the shy quiet kid with a dark past. Together, they look for a dead king.

3.5/5 : It surprised me to find so many people who absolutely adore this series. I'm not saying it was bad, but personally this was an average book to me. However, I absolutely love the characters (Adam is my favorite <3). Each character was charming in their own way yet they had flaws and insecurities that made them feel real. This first book is VERY character driven for a fantasy/supernatural story and slow-paced, so if you're willing to read 200 pages of character development before the plot starts, then this is for you. I'm not sure I'll continue the series.

The beginning dragged on for forever because none of the main characters had really met yet? They all kind of ran into each other occasionally, then they went their separate ways, until eventually becoming friends. I don't even remember the first half of the book because the writing felt dense and I was waiting for something to happen with the characters. However, once they all became friends, I couldn't put the book down. I enjoyed the character dynamics between them all. I also just enjoy the characters, period. Blue was probably my least favorite; she wasn't that interesting of a character. I loved Gansey's struggle of trying to find a purpose in his life. I liked how Gansey was conflicted with being the perfect ideal guy born into money, and how he overthought his words to the point where they lost their meaning. I also loved Adam; how he tried so hard to belong in the Raven Boy uniform and title. Ronan and Noah were cool too, although not much was explored with them. The plot was engaging, and the plot twist were good. It picked up the pace in the last 100 pages. Whelk was a sad and pathetic villain, which I appreciated. I've tried reading other books by Maggie Stiefvater, and I've concluded that her writing style isn't for me. It's very slow burn and wordy, which is what some people like, but personally, I don't. My favorite chapter was when Ronan fought Adam's dad. I was so happy Adam stood up for himself, even if it wasn't by a lot. I loved his character growth and his interactions with Gansey; how they're both opposites who want what the other wishes they could change. I would have enjoyed this book more if the writing style wasn't so dense, and if the POVs weren't so melodramatic. There was a lot of 'dancing around the topic' before the book actually got to the point.

What I Take Away From This: Searching for a greater meaning to your life isn't worth it at the expense of the meaningful things in your own life. Fate has plans for you, so good luck with that. I can't think of any other themes, but I'm sure the series explores them in later books. I don't like slow burn novels.

Blue is the daughter of psychics, and all her life they’ve told her that if she kisses her true love, he’ll die. Then, when she’s sixteen, she goes to the churchyard for the yearly St. Mark’s Day parade of the next year’s dead, and she sees a spirit, something she’s never been able to do before. The only reasons she can see him, she is told, are either that he is her true love, or that she killed him. Soon after, three boys come to her house for a reading: Adam, a proud abused boy Blue may love, Ronan, a hard boy who’s father’s death has deeply scarred him, and their leader Gansey, the boy who’s spirit she saw. She quickly becomes involved with Gansey’s all-consuming search for Owen Glendower, a famous Welsh king he believes is sleeping beneath the ley line running through their town, and who, legend says, will grant a wish to whomever wakes him. But there is another searching for Glendower: Whelk, a dangerous man with a shadowy past. Together they race to find something invisible, whose power they don’t fully understand, but which could change the course of the lives of all of them.
I read this book a while ago, but had to reread it to prepare for reading the Raven King, the fourth book in the series. It was just as excellent to read this time around as it was the first time. The characters are likable and well written, the plot mysterious but not too complex, and it keeps you wanting to read on. Next up will be Dream Thieves, the next book in the Raven Cycle.

Starting in on this was a little strange, I’ll admit. I read it completely because of the hype, but I wasn’t really sure what to expect. I know I wasn’t expecting the protagonist to be the daughter of a true psychic, and for four prep school boys to be searching for a long dead Welsh King. The first half of the story borders on magical realism, and by the time we’re about 2/3 of the way through we’re in full on fantasy mode.
I LOVE Stiefvater’s writing. The way she paints a scene and fleshes out characters continues to draw me in and fascinate me. Even though the whole prep school scene doesn’t intrigue me, I was completely on board from about halfway through. The story does take a little bit to build up- so if you’re one of those who DNF’s within the first 50 pages or so, I encourage you to hang on and see it through. I will most certainly be continuing with the series.

I LOVE Maggie Stiefvater's books. The thing is, she had to add a lot of detail so half of the book were a little boring. I liked the end though.

Ravindersidhu thinks this title is suitable for 13 years and over

jinjier_kookies_ thinks this title is suitable for 11 years and over

LVCCLD_KathyD thinks this title is suitable for 13 years and over

NikT thinks this title is suitable for 14 years and over

awebster92 thinks this title is suitable for 13 years and over

DBRL_IdaF thinks this title is suitable for 13 years and over

VV12 thinks this title is suitable for 13 years and over

mandikerr thinks this title is suitable for 12 years and over

“I guess now would be a good time to tell you. I took Chainsaw out of my dreams.”
-Ronan

Today, Blue thought, is the day I stop listening to the future and start living it instead

"Gansey. That's all there is."

Despite his interest in Latin, Ronan had declared their Latin teacher a socially awkward shitbird earlier in the year and further clarified that he didn't like him.

Violence: A scene of domestic violence vs. one of the characters. One character gets trampled to death non-graphically.