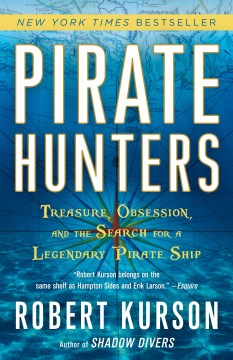 The Search for the Golden Fleece

This is a great non-fiction look into the pirate world, and the quest for those mysterious lost ships from times of lore! A must read, but then ... your quest will continue!

4 - 4 1/2 star read. I read this book on the recommendation of my son and really enjoyed it. I don't often read non-fiction books, but this one was an easy read and was fascinating, exploring why people dive for treasure ships and what actually helped them find this pirate ship. I loved the history of the era, learning about pirates and the navies that either encouraged or hunted them. It was a fascinating look into something different from the Hollywood version of pirates. Kurson writes well and keeps the reader interested until the end. Will enjoy reading more of his books. A very interesting read.

Fun book about the endless childhood dream of finding pirate treasure. Interesting insight into the passion for history, risks and challenges, networking and politics faced by a couple of famous divers and their love of the discovery.

One of my favorite non-fiction books of 2015. Who doesn't like pirates and hunting for treasure, especially because you won't get seasick!

An easy and pleasurable read.

This is a great non-fiction look into the pirate world, and the quest for those mysterious lost ships from times of lore! A must read, but then ... your quest will continue!

Very entertaining book. Loved the thrill of gold fever. Met the author at Books Inc. which made the book even more fun to read.

What a great read. Two modern day treasure hunters search down the location of a lost pirate ship that went down hundreds of years ago in a battle with the Brits. The background information on pirating is fascinating. This is a fast read, written to both inform and entertain you. It is a real life adventure story.

reviewed in the Stratford Gazette

This was an interesting narrative of the search for a Golden Age pirate ship. I really liked the blend of historical and contemporary events in this book. The author provides historical background on pirates, but he also goes into a lot of detail on modern-day diving and treasure hunting techniques. Photos of some of the artifacts the team found are in the book as well. I do have to say, I could have done without the incredibly detailed biographies given of the treasure hunters Chatterton and Mattera--it simply diverted me from the main storyline a little too much. However, this was overall an entertaining and informative read. A great real-life thriller for history buffs!

This page-turner is a fun and fast-paced exploration of the hunt for an exceedingly rare type of shipwreck - a pirate vessel from the golden age of piracy. Kurson provides a lot of biographical detail about the main players, and even though the outcome is pretty much known from the beginning, he manages to maintain tension and suspense throughout. The fascinating life of the pirate is also explored, shedding light on this period of colonial expansion. I couldn't get past the uncomfortable feeling though, that such wrecks should be more the domain of archaeologists rather than treasure hunters.... Still, this is a good book; I'm looking forward to reading Kurson's bestseller, Shadow Divers, sometime soon.

Ahoy, mateys! If you are looking for the perfect summer read, be it porch, beach or hammock, look no farther. The latest from Robert Kurson (author of Shadow Divers) has it all… adventure, exotic locales, and the mysterious, unbelievable history of the most infamous pirate you’ve never heard of – John Bannister. “John who?”, you ask? Bannister. A respected gentleman and merchant sailor who turned rogue and managed to plunder, rob and fight his way into not very many history books. His ship, The Golden Fleece, was also unknown to all but a few, scuttled after a skirmish with the British Royal Navy in which Bannister once again escaped.

Chatterton, a former host of the History Channel’s Deep Sea Detectives, and Mattera, a former bodyguard with nearly three decades of deep-sea diving under his belt, decided to go after The Golden Fleece when another legendary treasure-hunter, 69-year old Tracy Bowden, let them in on Bannister’s tale. The ship might hold gold doubloons or nothing at all, but it was the genuine article – a pirate ship from the golden age of Caribbean piracy in the late 1680’s. We’re talking Captain Jack Sparrow kind of escapades, without the curses of course – but even so this account of finding the Golden Fleece reads like an action film.

This is partly because Kurson details part of Chatterton and Mattera’s colourful lives. Chatterton served as a medic in Vietnam; Mattera, once in trouble with known crime families in New York City then became a police officer. These stories have little to do with the treasure hunt, until you realize that back in the day, Chatterton and Mattera just may have been pirates themselves. Kurson also takes us back to what it might have been like to sail the Caribbean in the 17th century, describing in detail a hypothetical battle with a pirate ship and the ensuing chaos.

The men spent 2 long years and nearly everything they had in search of Bannister and his Golden Fleece. The search took them from New York to Miami, from the Dominican Republic to Spain and back again, searching through hundreds of documents, many of which had not been handled in centuries. And in the end…

Well, you’ll just have to read this exciting tale yourself. Seek ye a copy of Pirate Hunters at ye olde public librarie under the code, “Shelf Life reviewed”.