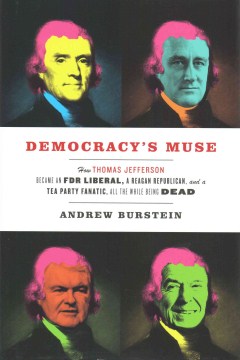 How Thomas Jefferson Became An FDR Liberal, A Reagan Republican, and A Tea Party Fanatic, All the While Being Dead

In political speech, Thomas Jefferson is the eternal flame. No other member of the founding generation has served the agendas of both Left and Right with greater vigor. When Franklin Roosevelt dedicated the iconic Jefferson Memorial on the founder’s two hundredth birthday, in 1943, he declared the triumph of liberal humanism. Harry Truman claimed Jefferson as his favorite president, too. And yet Ronald Reagan was as great a Jefferson admirer as any Democrat. He had a go-to file of Jefferson’s sayings and enshrined him as a small-government conservative.

So, who owns Jefferson--the Left or the Right? The unknowable yet irresistible third president has had a tortuous afterlife, and he remains a fixture in today’s culture wars. Pained by Jefferson’s slaveholding, Democrats still regard him highly. Until recently he was widely considered by many African Americans to be an early abolitionist. Libertarians adore him for his inflexible individualism, and although he formulated the doctrine of separation of church and state, Christian activists have found intense religiosity between the lines in his pronouncements.

The renowned Jefferson scholar Andrew Burstein lays out the case for both "Democrat" and "Republican" Jefferson as he interrogates history’s greatest shape-shifter, the founder who has inspired perhaps the strongest popular emotions. In this timely and powerful book, Burstein shares telling insights, as well as some inconvenient truths, about politicized Americans and their misappropriations of the past, including the concoction of a "Jeffersonian" stance on issues that Jefferson himself could never have imagined.

Here is one book that is more about "us" than it is about Jefferson. It explains how the founding generation’s most controversial partisan became essential to America’s quest for moral security—how he became, in short, democracy’s muse.

Baker & Taylor
Looks at the lasting, yet malleable image the third president has left on American society, a founding father who is claimed by both sides of the aisle to achieve their aims and suit their needs.

Book News
Citing his book as a critique of modern politics, Burstein challenges those who would find comfort and certainty in reconstituting Jefferson. The author takes the reader on a trip through “impersonations” of the historical Jefferson over the decades since his demise manufactured by both political parties, who find him a resource for asserting a national existential consciousness. Seven chapters are divided into two parts: political setting; culture wars. Chapters are: “Eternal hostility against every form of tyranny”; “his mind liberal and accommodating”: when John F. Kennedy dined in company; “we confide in our own strength”: the Reagan revolution(ary); “the boisterous ocean of political passions”: Jefferson since William Jefferson Clinton; “misery enough, but no poetry”: race and the remaking of a symbol; “abortion to their hopes”: Jefferson versus religious authority; “history becomes fable”: yesterday’s future. Annotation ©2015 Ringgold, Inc., Portland, OR (protoview.com)

Loading...
No similar edition of this title was found at PCPL.

Try searching for Democracy's Muse to see if PCPL owns related versions of the work.