Saved Searches Advanced Search
All physical items in our collection have been hidden from view, and you will see a message that we do not own the item. Please limit your Suggest A Purchase requests to audio downloads and ebooks. These formats are not affected by the current situation. Please save your requests for other types of materials until full service is restored. Thank you for your patience and understanding.
Print 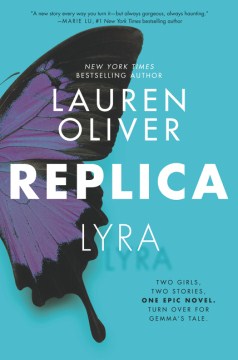 Baker & Taylor
In a book that invites readers to start at either end or alternate between perspectives, Lyra and Gemma get the chance to escape from the protective environments in which they were raised while uncovering secrets about the bioresearch facility that connects them.

From Lauren Oliver, New York Times bestselling author of Before I Fall and the Delirium trilogy, comes an epic, masterful novel that explores issues of individuality, identity, and humanity.

Lyra’s story begins in the Haven Institute, a building tucked away on a private island off the coast of Florida that from a distance looks serene and even beautiful. But up close the locked doors, military guards, and biohazard suits tell a different story. In truth, Haven is a clandestine research facility where thousands of replicas, or human models, are born, raised, and observed. When a surprise attack is launched on Haven, two of its young experimental subjects—Lyra, or 24, and the boy known only as 72—manage to escape.

Gemma has been in and out of hospitals for as long as she can remember. A lonely teen, her life is circumscribed by home, school, and her best friend, April. But after she is nearly abducted by a stranger claiming to know her, Gemma starts to investigate her family’s past and discovers her father’s mysterious connection to the secretive Haven research facility. Hungry for answers, she travels to Florida, only to stumble upon two replicas and a completely new set of questions.

While the stories of Lyra and Gemma mirror each other, each contains breathtaking revelations critically important to the other story. Turn the book one way and read Lyra’s story; turn the book over and upside down and read Gemma’s story. The two distinct parts of this novel combine to produce an unforgettable experience for its two young heroines—and its reader.

Baker
& Taylor
Escaping from the clandestine research facility where they were created, two replicas, or human modelsùknown more by their numerical designations than by their individual namesùteam up with a sickly girl who has mysterious family ties to the facility. By the best-selling author of Before I Fall. Simultaneous eBook. 250,000 first printing.

The story about replicas (clones) with added mystery carried me easily through. Add a quirk of duality in main characters, Gemma and Lyra, present the book materially in upside down/reverse-side-of-the-book stories, make interesting reference to parallel phrases in "The Little Prince"....and you have a compelling YA novel.

You have to give this one time. I was hesistent and skeptical at first because of the format. I ended up reading Lyra first and then Gemma. I thought it was going to ruin Gemma's story for me and when I began, I was rather bored. However, as Gemma's story progressed I found it just as interesting from her perspective as I did from Lyra's perspective. Also, I didn't know this was a series so when I read Lyra's story I was ridiculously unsatisfied but halfway through Gemma's I learned it was a series. So I was excited knowing there was more to this story and these characters.

This was a very different book. The perspectives of both Gemma and Lyra greatly helped to solidify the events of the book, and provide clearer understanding. Although Lyra's part of the book had a dissatisfactory ending (in my opinion), the book tied up really well. The book was a perfect balance of events, with nice pacing to it, too. The book was also meaningful, with nothing just thrown in there without a reason. Throughout this book, I was easily forming my own reasonings and speculations about the mysteries of the characters, backstory, and events that took place. The book answered all of them, without making them anticlimactic. I greatly enjoyed getting to make my own theories as to what was happening in the book, and then getting to see the actual result. Overall, this was a great book and I will be recommending it to friends.