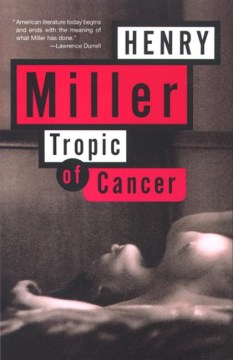 Help us crowdsource a challenging reading list! Last year, Jessica and I put together a local-centric recommended reads list for people taking on the 2016 Read Harder challenge put on by Book Riot. Well, it's time for the 2017 edition (here's the printable PDF), and this time, we'd like to invite YOU to share your favorite books that fit any of their categories, whether it's... Something … (more)

As with all my literary choices, I was drawn to read this by a Seinfeld episode. Beautifully written, the Seinfeld episode ends with this hackneyed, talentless tome of an American d-bag in Paris clutched onto by the filthy bum and ex-gym teacher, Mr. Heyman. Laying outside the library covered in dirty blankets, little baked bean teeth on full display, he utters, "Can't stand yah, can't stand yah" while clinging to his filthy copy. Metaphor indeed. Obviously, they (Seinfeld writers) liked it more than I did.

Couldn't finish this book. Just couldn't follow it and it didn't capture my interest

I really enjoyed parts of this book immensely, but as a whole it didn't keep me enraptured the whole time I was reading it. Which is the only reason it didn't make it to the 4-5 star rating. I would highly recommend this to anyone who enjoys stream of conscious writings, or risque writings.

A classic "dirty book." He's not afraid to drop the c-word.

I didn't know what to expect as all I really knew about the novel was the infamous reputation. I like everything with angst and this book contains a great deal of angst. A great look at what constitutes living. I had a great deal of empathy for the author and his views of living life. Probably not for everyone.

I won't rate this as I didn't read all of it. I can see why people say Henry Miller is brilliant. His writing is visceral and distinct. At a later date I may try to tackle it again but at this time I just didn't want to decipher it. I often read for escapism and this book isn't something which lends itself to that.

Miller oscillates between what feels like self-conscious rebellion (against "literature," I suppose) and an alcohol-fueled but visceral documentary of his life in Paris. The prose crackles like a high-tension wire, but the thread of the narrative takes abrupt turns that can be difficult to follow. The book is populated by a cast of losers and struggling/delusional artists that form the backdrop of Miller's somewhat objective perspective on the rotting-yet-fecund Paris of the early 20th century.

Henry Miller employs a stream-of-consciousness style of writing in this experimental work. Tropic of Cancer more closely resembles a diary than it does a novel. Because Miller doesn't follow the standard conflict-rising action-resolution formula, this book can be difficult to digest. Miller breaches countless taboos in Tropic of Cancer, so much so that by the time of the book's abrupt close, the reader inevitably becomes desensitized to the once shocking debauchery of Miller and his friends. The well-documented book ban had the unintended consequence of allowing Tropic of Cancer to occupy an almost mythical realm of literature, but this book is certainly not "one of the ten or twenty great novels" of the twentieth century. Miller's writing is crude and unrefined, and Tropic of Cancer is weighed down by lengthy, unintelligible, hallucinatory discourses on the history of man. Stranger still, Miller intermittently pens long-winded, self-indulgent passages in which he unconvincingly peddles the earth-shattering import of his allegedly revolutionary book. I can understand why people succumb to the hype surrounding this book. For me, Tropic of Cancer was a disappointment.

The type of book that makes you want to go out and live, not stay in and read more. ( I love reading but the best writers spur you towards life; in my opinion)

Just a tremendous 'in the moment' book.

Miller is probably my favorite writer ever. He can make you feel more in one sentence than most authors can in a whole book.

There are paragraphs you will begin reading and by the time they are through you will have become so swept up in them you wont even remember how they started. That may seem crazy but Miller takes you on a ride.

Probably the greatest thing I have ever read.

Its a shame people think of this book and think about the controversy around it when it came out. It is way more than erotica, it is soul and life.

Tropic of Cancer is a novel by Henry Miller that has been described as "notorious for its candid sexuality" and as responsible for the "free speech that we now take for granted in literature". It was first published in 1934 by the Obelisk Press in Paris, France, but this edition was banned in the United States.Its publication in 1961 in the U.S. by Grove Press led to obscenity trials that tested American laws on pornography in the early 1960s. In 1964, the U.S. Supreme Court declared the book non-obscene. It is widely regarded as an important masterpiece of 20th-century literature.