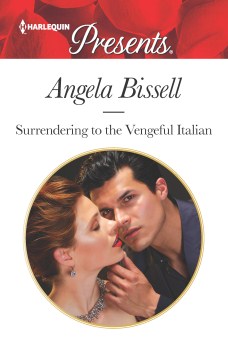 Surrendering to the Vengeful Italian

Harlequin
One step from surrender

For seven years, formidable Leo Vincenti has planned his vengeance on Douglas Shaw and nothing will stop him. Not even Shaw’s stunning but treacherous daughter, Helena, who—right now—is pleading for leniency. Grim satisfaction spreads through him as he knows she would willingly never take up his challenge to return to his side.

But he has greatly underestimated Helena. Secrets drive her as if the very devil were on her heels. And suddenly the passion that left them undone years before is forcing them both to the brink of surrender…

Oh, those sweaty Italians! So passionate, hot blooded, muy macho and bent on their vendettas! What’s a modern-day romantic fantasy without a racist stereotype to spice up the story?

Leo Vincenti is the epitome of the type. Powerful, rich, handsome as a Greek god, smoldering with heat, sensuality, repressed rage and pumped full of testosterone, he’s not the sort of man to take “no” for an answer. He knows what he wants and he gets it when and how he wants it. Oh, you stallion, you.

The heroine is one Helena Shaw, daughter of Douglas Shaw, the man Leo is determined to ruin—all in the name of business, of course. Douglas has the option of staying on at the firm Leo has just bought out but only if he gives up control. It’s a situation Leo knows will infuriate Douglas—in fact, he’s counting on it. Humiliating the man who demolished Leo’s business ventures all those years ago is part of Leo’s revenge. Helena is equally determined to stop Leo’s plan, not because she fears for her father but because she worries about the retaliation Douglas will take against the rest of her family.

Sometimes Douglas Shaw is actually pleasant. Then he once again turns into an abusive bastard. Her mother, Miriam Shaw, is that typical browbeaten abused woman yet Helena is hoping to bring her mother to her senses.

So how is Helena’s behavior any different? Because Leo refuses to hit her? He’s not above manhandling her (her word not mine), threatening to take matters into his own hands if she refuses to capitulate and making seductive moves on her in spite of her protests just to get her to moan like the sex-starved kitten she is.

She shows spunk, at times, but Leo never lets that stop him for long. Her resistance is only token because she melts like butter on a hot griddle whenever Leo gets his paws on her. I was hoping she’d keep him at a distance; after all, Helena doesn’t want to be like her craven mother. But Helena is too weak willed where Leo is concerned. In one truly appalling scene, she rejects his attempts at forceful intimacy only to give in when he barges into her room later when she’s naked. She squeals at him to leave but he’s resolute at making her give in to her and his urges. And she does. Over and over and over again.

If you’re a teenager who swoons over these dominating, pushy, “when she says no she means yes” types, by all means jump into the pigsty with Leo Vincenti. Just remember that those bad boys you worship in real life usually grow up to be bad men. Irresistible, my foot. Resist, ladies, resist.