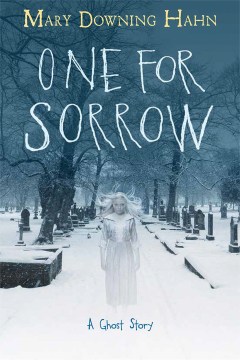 Speaking for my AMAZING daughter. She says:

"Elsie snatched me and held on tight. I read until eleven P.M., when I finished it...Mary Downing Hahn weaves excellent stories, and out of all her book that I've read, this one is my favorite."

I loved Mary Downing Hahn's books when I was a kid, and occasionally one of her books catches my eye, inspiring me to return to her creepy, chilling, and highly entertaining reads. None of the more recent books she written have ever topped my favorites, Time for Andrew and Wait 'Til Helen Comes, but there have been a decent few. One for Sorrow is one of them.

The story begins with Annie Browne, who is the new girl in town during the height of the United States' involvement in World War I and when the devastating Spanish Flu was making its presence known everywhere in the world. She's nervous about going to a new school, and hopeful about making new friends. On her very first day, she is immediately befriended by Elsie Schneider, whose abrupt declaration that they are now best friends and sheer forwardness throws Annie on the back foot. Elsie, however, is perhaps the least popular girl in their shared class, and is a target for teasing and bullying, and is branded as a tattletale, liar, and thief (of which there is some basis, though on the first one [tattletale] Elsie's actions are often prompted by the bullying she receives from the other children). Elsie's unpopularity quickly sticks to Annie, and she also becomes a target for the other girls' teasing and bullying, and Annie becomes desperate to separate herself from Elsie. The moment an opportunity comes to do so, Annie jumps at it, even joining the group of popular girls that are the prime offenders in bullying Elsie.

The story takes a chilling turn when the Spanish Flu begins making the rounds in the community, and Elsie becomes one of its many victims. But Elsie refuses to go into death quietly, and instead her spirit lingers on the earth seeking her revenge against all those who wronged her - starting with Annie.

I will say that I did enjoy this story. The pacing was pitch perfect, and the story was so interesting that it kept me glued to it from start to finish (as evidenced on how quickly I read it). That said, there were some things that rather disturbed me, particularly the bullying and peer pressure and how it was handled. Rosie, the most popular girl in Annie's class and the one she desperately wants to be friends with, is a horrible, terrible bully, and there is little in the way of real resolution to her actions. The adults are lackluster at best in handling the bullying that Annie, Rosie, and the other girls take part in toward Elsie, which is disturbing. When the girls discover that Elsie died of the Flu, they are horrified, believing themselves responsible for Elsie catching the disease since they took her flu mask from her, but there is very little true remorse among them for how they treated Elsie in general.

Also, there is very little resolution on the part of Elsie herself. Elsie claimed more than once to Annie that her father and stepmother abused and mistreated her, that her father blamed her for her mother's death and that her stepmother hated her because she is not her child. But other than one occasion where Annie witnesses Mr. Schneider pulling Elsie a little roughly into the house after Annie and her father bring Elsie home (which can be explained by him being worried because she was out so late, well after dark), there is no hint of bad behavior on the part of either Mr. and Mrs. Schneider. Indeed, Mr. Schneider appeared devastated by Elsie's death, and was determined to learn the identities of the girls who bullied Elsie so badly and took her Flu mask, wanting to inform their parents "[wh]at sort of daughters they ha[ve]". I would have liked to have seen more of what was going on inside the Schneider home, to know if Elsie's claims were exaggerations and lies or if there truly was something bad happening there.

Overall, one of the best books by Hahn that I have read in a while, despite the issues I mentioned.

I don't read very often but I couldn't put it down!!

Mary Downing Hahn has a gift for writing genuinely creepy and spooky ghost stories for children. Yes, this one is yet another truly dark and eerie ghost story. I liked the 1918 setting and how the flu epidemic was woven into the story. The book was certainly suspenseful and a good page-turner. The book also looks at important issues like bullying and peer pressure. I wish, however, that both the protagonist and the horrible ghost who tormented her had both achieved a little more insight by the end of the story into their own behaviour and how they had both contributed to their problems. It was a good book and a good read, but with a little more character development it could have been even better.

Annie makes a big mistake when she decides not to be Elsie's best friend- now Elsie won't leave her alone- even though she's dead.

Mary Downing Hahn is a master of ghost stories, and this fast-paced historical haunting doesn't disappoint! The main characters are believable, the descriptions of the bullying ghost are perfectly creepy, and the ending is unique and satisfying. This book is Guided Reading Level P, Lexile 660, Accelerated Reader 3.7.

This book is really good and I was hooked from the start. It doesn't have any swear words or gore but it's still scary. I finished it in four days.

blue_cat_17608 thinks this title is suitable for 10 years and over

pink_dog_12720 thinks this title is suitable for 9 years and over

indigo_lark_30 thinks this title is suitable for 10 years and over