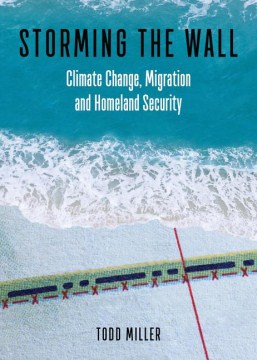 "According to U.S. military planners, climate change now poses the #1 national security threat to the United States, even before terrorism. The Internal Displacement Monitoring Centre reports that a person is four times more likely to be forced to move due to environmental disaster than by war, and in 2015 alone, 19.2 million people were displaced worldwide by environmental disasters. Droughts, fires, and floods are driving ever-larger numbers of people to cross national borders, and the problem is not just the vast numbers of people on the move, but also the legions of highly militarized border armies being deployed to stop them. In fast-paced prose, Todd Miller travels to hot spots in the United States and around the globe to investigate how environmental crisis is creating millions of climate refugees who are challenging the developed world's borders and resources. Miller explores how a sense of threat in the United States is giving rise to high-tech surveillance fortresses and fueling calls for an ever-expanding border wall. He also weaves in stories of people engaged in creative defiance of the armies, border patrols, and police being deployed to fight those in need. Miller passionately makes the case for ecological restoration, not border militarization, as the best way to achieve sustainability and security."-- Provided by publisher.
"Todd Miller's writings about the border have appeared in the New York Times, Tom Dispatch, and many other places. Praise for Storming the Wall "Nothing will test human institutions like climate change in this century-as this book makes crystal clear, people on the move from rising waters, spreading deserts, and endless storms could profoundly destabilize our civilizations unless we seize the chance to re-imagine our relationships to each other. This is no drill, but it is a test, and it will be graded pass-fail"-Bill McKibben, author Earth: Making a Life on a Tough New Planet "As Todd Miller shows in this important and harrowing book, climate-driven migration is set to become one of the defining issues of our time. " This is a must-read book."-Christian Parenti, John Jay College of Criminal Justice, author of Tropic of Chaos: Climate Change and the New Geography of Violence "Todd Miller reports from the cracks in the walls of the global climate security state-militarized zones designed to keep powerful elites safe from poor and uprooted peoples. Miller finds hope--hope that may not survive in Trumpworld."-Molly Molloy, Research librarian for Latin America and the border at New Mexico State University and creator of "Frontera List" "Miller delivers a prescient and sober view of our increasingly dystopian planet as the impacts of human-caused climate disruption continue to intensify."-Dahr Jamail, award-winning independent journalist, author of The End of Ice "Storming the Wall demonstrates why the struggles for social justice and ecological sustainability must be one struggle. Todd Miller's important book chronicles how existing disparities in wealth and power, combined with the dramatic changes we are causing in this planet's ecosystems, mean either we come together around our common humanity or forfeit the right to call ourselves fully human."-Robert Jensen, University of Texas at Austin, author of The End of Patriarchy, Plain Radical, and Arguing for Our Lives "Governments across the world today are planning for climate change. The problem, as Todd Miller ably shows, is that they're not planning mitigation, but militarization."-Roy Scranton, author of War Porn and Learning to Die in the Anthropocene "Here is the largely untold back story of the thousands of people turning up on our borders, and challenging the very idea of those frontiers in the process."-Mark Schapiro, author of The End of Stationarity: Searching for the New Normal in the Age of Carbon Shock"-- Provided by publisher.
Publisher: San Francisco, CA : City Lights Books, [2017]
ISBN: 9780872867154
0872867153