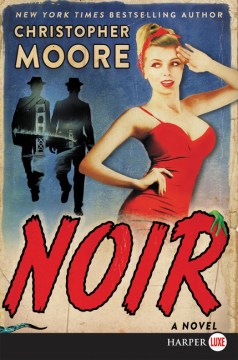 Baker & Taylor
On the streets of post-World War II San Francisco, a smitten barkeeper and unofficial fixer-for-hire investigates his paramour's disappearance amid a series of weird events involving an unidentified flying object and a mysterious plane crash.

The absurdly outrageous, sarcastically satiric, and always entertaining New York Times bestselling author Christopher Moore returns in finest madcap form with this zany noir set on the mean streets of post-World War II San Francisco, and featuring a diverse cast of characters, including a hapless bartender; his Chinese sidekick; a doll with sharp angles and dangerous curves; a tight-lipped Air Force general; a wisecracking waif; Petey, a black mamba; and many more.

It’s not every afternoon that an enigmatic, comely blonde named Stilton (like the cheese) walks into the scruffy gin joint where Sammy "Two Toes" Tiffin tends bar. It’s love at first sight, but before Sammy can make his move, an Air Force general named Remy arrives with some urgent business. ’Cause when you need something done, Sammy is the guy to go to; he’s got the connections on the street.

Meanwhile, a suspicious flying object has been spotted up the Pacific coast in Washington State near Mount Rainer, followed by a mysterious plane crash in a distant patch of desert in New Mexico that goes by the name Roswell. But the real weirdness is happening on the streets of the City by the Bay.

When one of Sammy’s schemes goes south and the Cheese mysteriously vanishes, Sammy is forced to contend with his own dark secrets—and more than a few strange goings on—if he wants to find his girl.

Baker
& Taylor
A madcap noir set on the streets of post-World War II San Francisco follows a smitten barkeep and unofficial fixer-for-hire as he investigates his paramour's disappearance amid a series of weird events involving an unidentified flying object and a mysterious plane crash. By the author of Secondhand Souls. (fantasy). Simultaneous.

Fast read - Funny, very CM book - the title tells the whole story, if you like this genre of detective stories you'll love the book

" I cut the corner way too tight turning off of Sutter onto Hyde, the tires screeched, the cab hit the curb, and we went up on two wheels for a bit." " I closed the door on the kid's rant. Two steps into the street I was feeling like I should head over to the five-and-dime on Polk Street and throw myself on Stilton's mercy, beg her to forgive me, tell her i made the mistake of my life and I was not a war veteran and i was a liar and a bum. Broads love that."

Another master peice from the master of humorist writing Christopher Moore. Like so many of his books he thinks ouside of the box and doesn't let you down. Everything that needs a voice has one. Enjoy the romp through 1947 San Francisco.

Not anywhere as good or funny as it thinks it is. I've never read this author before, and after this novel, I have no desire to try anything else he wrote. Go read Dashiell Hammett or Raymond Chandler instead, if you haven't already.

This would be a fun read for any of us locals. It is set in early post-war San Francisco, and right-or-wrong, has a lot of city "lore". The plot is, as said in the reviews, "zany", but fun, with a lot of laugh-out-loud (I really seem to be into hyphens today) quips. I will be looking for some more from this author, whom I haven't before this time, noticed.

Just an average C Moore novel...would be good for a flight SFO to Paris...

This was my first Christopher Moore novel, and it's a "parody" of a dark genre, so it's not a regular CM novel, but anyway it's funny as blazes. I got 3 belly laughs, 5 moderate laughs and about a dozen snickers out of it. I don't know if it's "forced" but it's certainly entertaining!

I love Christopher Moore - I've been reading his books for about 15 years now, and they don't usually disappoint. This one, however, felt a little forced. He's too much of a humor writer to write something dark, in my opinion. That being said, it was a quick read, and pretty enjoyable.

I'm an ardent fan of Hammett and Chandler. They set the bar high; so far only Loren D Estleman has met it to my satisfaction. Other authors have attempted tributes to the noir genre, including Norman Mailer and Ray Bradbury, but they disappointed me. Luckily I sneaked a peek at Christopher Moore's afterword and read where he cheerfully admits his effort went astray, and explains just how, so I could read this book in the spirit of a Guys and Dolls type of lark (plus a space alien) and enjoy it as such. Not my favorite Moore novel but he's always fun.

It's cute in that old bumbling Debbie Reyonlds movie way. Didn't have that C Moore feel though.