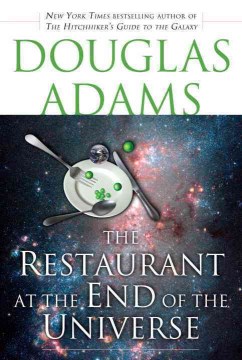 The Restaurant at the End of the Universe

Earthling Arthur Dent, Ford Perfect, and Zaphod Beeblebrox, the ex-president of the galaxy, are all aboard a space ship on a search for answers about life, the universe, and the perfect place to eat in space.
Publisher: New York : Ballantine Books, 2005
Edition: Del Rey books trade pbk. ed
ISBN: 9780345418920
0345418921

Not as good as hhgttg but still a hilarious read. After leaving Magrethea on The Heart of Gold, Arthur Dent orders a cup of tea, a drink apparently so complicated that the ship has to devote all its brainpower to making it. Doing that, the ship is unable to defend itself from a sudden attack by the Vogons. Arthur's friend ,Zaphod Beeblebrox, calls up his ancestor, Zaphod Beeblebrox the fourth. Zaphod the fourth causes Zaphod and Marvin to be whisked off to Ursa Minor Beta, While Trillian, Arthur and Ford are still in The Heart of Gold which is in a black void. One of the flaws I find in this book is the lack of direction. There seems to be no goal, just some random events stacked upon each other. It also makes a lot of its jokes at the expense of God which some readers won't appreciate. Everything else is either good or great, the description, ideas, one-liners and characters. Readers of Hitchhikers Guide to the Galaxy should definitely read this book. 3/5. @mittopic of The Hamilton Public Library's Teen Review Board

Not the best in the series.

How can I possibly like something as random and insane like The Restaurant at the End of the Universe :P? It really puzzles me how I love this writing. The utter nonsense presented as if it has some profound meaning hidden to it, in essence explains our life I guess. Wait, that actually makes this book deep doesn't it?

A really weird but oddly charming book, just like the one before it. There's really no way to predict where the story is about to go which is part of the fun. This funny sequel was an enjoyable read and I did enjoy it. I don't think I would read it again or that it was the most impactful book I've ever read but I really did like it.

Every bit as clever and humorous as the first book.

Not as good as Hitchhiker's Guide but still entertaining.

This sequel continues the oddities of the Universe through they eyes of our beloved whack-a-doodle characters and brings us to the brink of the great End, and sells us one way tickets to absolute enjoyable absurdity. Marvin is by far the funniest and sometimes even "familiar" character like myself and I believe if you've got your towel still ready, and soaked in lemon juice then continue on the insane ride through a unique perspective of the Known, and Unknown Universe.

one of the best series I've ever read. I definitively recommend it

I had high hopes for this book, because the first one was so good, but I was sadly disappointed. The book seemed to drone on and there was really a mixed up plot.

I would still recommend it because it's Douglas Adams and he's a brilliant writer.

“My universe is my eyes and my ears. Anything else is hearsay.”

“Life is wasted on the living.”

“The story so far: In the beginning the Universe was created. This has made a lot of people very angry and been widely regarded as a bad move.”

blue_penguin_3376 thinks this title is suitable for 13 years and over

xzhang17 thinks this title is suitable for 13 years and over

Picking up from the end of the first book The Hitchhiker's Guide to the Galaxy, Arthur, Marvin, Ford, Trillian, and Zaphod are aboard the Heart of Gold heading for the Restaurant at the End of the Universe. However, almost immediately they find themselves under attack by Captain Prostetnic Vogon Jeltz of the Galactic Hyperspace Planning Council (yes, the same one that oversaw the demolition of Earth) and his Vogon crew. Ford, Trillian, and Zaphod try to fly the Heart of Gold away from the Vogon ship, but their ship's computer is jammed because Arthur asked the Nutri-Matic machine for a cup of tea (long story). Facing imminent doom, the crew performs a séance and calls Zaphod’s great-grandfather. Zaphod’s great-grandfather miraculously saves them from death at the hands of Vogons, but teleports Zaphod to find a “Zarniwoop” and the ruler of the Universe. From there things only get crazier. Will anyone be able to find the question to the ultimate answer (42)?