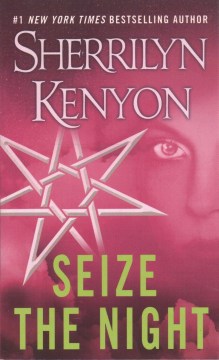 "Val" Magnus isn't a popular Dark-Hunter, he's a Roman, which means that the largely Greek Hunters have a major grudge hatred against him. He is also very conscious of his "background and breeding" making him even harder to stand as he acts as if he is above everyone else.

Tabitha "Tabby" Devereaux is a self taught vampire hunter. She hunts at night and runs an adult store in New Orleans during the day. She is sexy, sassy, takes no **** from anyone and immediately attracted to Valarius. This leads to conflicts in her family as her twin sister is married to a former Greek Dark-Hunter.

As Tabby and Val's love grows so does the danger they are in. One of the vampires that has a powerful grudge against Tabby and those around her resurfaces with the object to destroy Tabby's extended family as well as her.

Alongside the scorching hot romance there are some really interesting developments in the world as a whole. There were times when I had my heart in my mouth and I can't tell you how shocked and horrified I was by some events that occurred - this really was quite a traumatic read and parts of it brought tears to my eyes. This series just gets better and better with every instalment and I can't wait to continue the journey in Sins of the Night.

7th book about Valerius and Tabitha, preceded by Night Play and followed by Sins of the Night. I liked this story. Tabitha's character was fun and brave. It was great to finally "put some things to rest and call a truce".

love this series and this author. I really like Valerius and Tabitha's story.

Sixth book from Sherilyn Kenyon's Dark-Hunter series and my all time favorite book from the series and the first book i owned from this author.

Release date: December 28, 2004
Valerius isn't a popular Dark-Hunter-he's a Roman, which means that the largely Greek Hunters have a major grudge against him and his civilization for superceding them. To make things worse, he's very conscious of his aristocratic background and breeding. So it serves him right when he runs into Tabitha Devereaux. She's sassy, sexy, and completely unwilling to take him seriously. (Not to mention that she's the twin sister of the wife of former Dark-Hunter Kyrian-Val's mortal enemy.) What Tabitha does take seriously is hunting and killing vampires-and soon she and Val have to grapple with the deadliest of all Daimons-one who's managed to come back from the dead, and one who holds a serious grudge against both of them. To win against evil, Val will have to loosen up, learn to trust, and put everything on the line to protect a man he hates and a woman who drives him nuts.